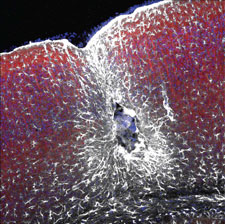 Axial cross section of rodent spinal cord following acute contusion injury. Depicted in the center is the glial scar, consisting of an inner core of fibroblasts (blue) surrounded by a wall of reactive astrocytes (white).

Pathologically, SCI manifests in two phases: the acute events surrounding primary injury typically result in damage or disturbance to the neuronal elements of the spinal cord, leading to the severing of axon tracts and neuronal cell death; however, within 1-3 days of the initial injury, SCI patients often experience a cascade of secondary pathological changes that amplify the initial traumatic injury and result in edema, spreading necrosis, inflammation, ischemia, and proliferation of reactive glial cells. Although little is known about the pathogenesis of this secondary phase, histological study has revealed a distinctive pattern of cellular events: in what appears to be a defense mechanism aimed at halting the spread of cellular damage, the injured neural tissue becomes isolated from surrounding healthy tissue by the formation of what is commonly referred to as the glial scar, consisting of a dense core of fibroblasts, surrounded by a symmetrical wall of reactive astrocytes.

Following SCI, astrocytes – the largest and most abundant glial cell in the CNS – undergo reactive changes and form a barrier of projections linked together by gap-junctions. The hallmark of reactive changes in astrocytes, also known as “astrogliosis”, is the upregulation of the expression of intermediate filament proteins (e.g. glial-fibrillary-acid protein), and gap junction proteins (e.g. connexin 43) that together facilitate network communication and the passage of small intracellular molecules from one astrocyte to the next.

Research in our lab has shown that astrocytes also engage in long distance signaling via the release of purines, such as adenosine tri-phosphate (ATP), which non-selectively stimulates purinergic receptors on a number of cell types, including neurons and microglial cells. Although the cellular source of ATP remains a matter of some controversy, bioluminescent imaging of ATP in animal models suggests that large quantities are released to the extracellular space following acute spinal cord injury. Our work has focused on the role that purinergic signaling may play in the pathogenesis of the early secondary expansion of injury and the onset of conditions that prevent the regrowth of injured axons, as this time period represents a unique opportunity to reduce the severity of tissue injury. Stimulation of one purinergic (ATP) receptor in particular, P2X7, on microglia has been shown to trigger the release of a host of additional signaling molecules, including proinflammatory cytokines and agents linked to the development of chronic neuropathic pain.

Understanding the mechanisms of the secondary phase of spreading cellular damage following acute SCI constitutes an important step that will hopefully translate to developing treatments with specific cellular and molecular targets. In this regard, we have developed a small P2X7 receptor antagonist derived from harmless blue food coloring (Brilliant blue G) that has been shown to block the local action of ATP and disrupt the sequelae of its downstream signaling consequences. Ongoing work focuses on identifying additional pharmacological agents suitable for translation to the clinical setting.

This project is supported by funding from DOD – Spinal Cord Injury Research Program (Development of a Small Molecule P2X7R Antagonist as a Treatment for Acute SCI) & NIH – National Institutes of Neurological Disorders and Stroke. (ATP as the Instigator of Inflammatory Responses to Spinal Cord Injury).

Functions of astrocytes and their potential as therapeutic targets. Kimelberg HK, Nedergaard M. Neurotherapeutics : the journal of the American Society for Experimental NeuroTherapeutics. 2010 Oct 0; 7(4):338-53.