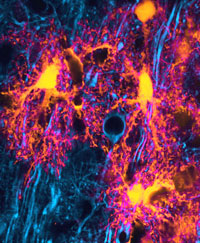 The last 20 years have witnessed a dramatic departure from the classical thinking: neurons are no longer believed to be the sole substrate of higher brain function and deciphering the role of neuroglia as active contributors to coordinated network activity has emerged as an exciting frontier in the study of neuroscience.

Interest in the study of neuroglia was greatly catalyzed in the 1990s when it was discovered that astrocytes –which throughout evolution increase in proportional makeup, cell size and complexity– respond to stimuli and the release of neurotransmitters via a special form of non-electrical excitability. In early work using cell cultures our group demonstrated that astrocytes respond to stimulation by fluctuations of the intracellular calcium ion (Ca2+) concentration, and that these fluctuations spread through networks of astrocytes physically coupled by gap-junctions. Although limited by the available experimental techniques, we observed that increases in astrocytic Ca2+ corresponded to changes in the synaptic activity of neighboring neurons. This finding, along with similar discoveries from independent labs led to an explosion of interest in the field of neuro-glial signaling that has since resulted in hundreds of publications implicating astrocytes as important contributors to what is now a shifting paradigm of information processing in the central nervous system (CNS). 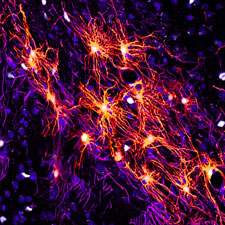 Numerous follow-up studies have shown that activation of Ca2+ signaling in astrocytes can regulate both excitatory and inhibitory synaptic transmission, mediate essential physiological functions such as control over cerebral blood flow and respiratory rate, and influence state dependent changes in cortical activity during, for example, sleep and working memory. However, the exact mechanism for how astrocytes exert influence over neuronal networks remains a matter of intense controversy.

One popular model known as the tripartite synapse suggests that astrocytes, which extend processes that ensheathe neuronal synapses, detect the release of neurotransmitters and actively modulate pre- and post-synaptic neurotransmission by the calcium dependent release of gliotransmitters (i.e. transmitters released from glial cells that facilitate communication between neurons and other glia). However, recent evidence that astrocytes undergo developmental regulation of receptors sensitive to glutamatergic neurotransmission, and thus do not express receptors (e.g. mGluR5) thought to mediate gliotransmitter release in the adult brain, have questioned this model. Additionally, the functional significance of gliotransmission remains unclear due to the non-physiological nature of many of the experiments that gave rise to the concept.

What then might be the physiological function of astrocytic calcium signaling in the adult brain? Current work in our lab has suggested a simpler, but equally potent mechanism for astrocytic control of neuronal networks. In vivo imaging in the live rodent brain indicates that astrocytic calcium signaling corresponds with a decrease in extracellular potassium ion (K+) concentration, which in turn triggers neuronal hyperpolorization and suppression of excitatory synaptic activity. Although ion homeostasis has long been considered one of astrocyte’s passive housekeeping functions, our work suggests that Ca2+-dependent active uptake of K+ represents an active mechanism, capable of dynamically modulating the activity of neural circuits.