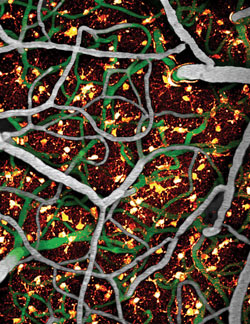 Calcium signaling at the glial-vascular junction.

Thinking, reading, writing, throwing a baseball, or playing a musical instrument – are all actions that require spatially localized regions in the brain to undergo heightened neural activity. But when neurons undergo periods of intense activity, they demand oxygen and a replenishment of their depleted metabolic reserves. The question of how the brain knows exactly which regions to supply extra blood and nutrients to, a concept termed functional hyperemia, is one that underlies the very basis of human cognition and consciousness. Yet, despite decades of extensive study and its ubiquitous relevance to our moment-to-moment experience, it is a question that we are just now beginning to shed light on.

Although many of the brain’s higher order cognitive functions remain shrouded in mystery, recent advances in nuclear imaging modalities, such as MRI and PET have brought us closer to understanding the link between brain activity and simple behaviors. Blood-oxygen-level-dependent functional-MRI (BOLD fMRI) uses our understanding of hyperemia to functionally compartmentalize sensory and motor tasks within their anatomically discrete brain regions. The level of saturated deoxyhemogloben in blood produces an identifiable magnetic signal shift that can be contrasted to show which brain regions are demanding more blood; acting as a proxy for intense neural activity. However, despite its frequent use and powerful ability to map functional status, clinicians and researchers alike have only begun to understand the sequence of events that BOLD fMRI is actually imaging.

Our interest in hyperemia stems from the fact that despite being a hallmark of the healthy brain, the sequence of events and cellular players that orchestrate such a fundamental aspect of neurophysiology remain unknown. In studying functional hyperemia, we first recognized that neurons do not spatially interface with blood vessels. Heightened neural activity must therefore be acting through an intermediate to orchestrate changes in blood flow. Our early work demonstrated that astrocytes, which interface with neuronal synapses and project processes that surround the blood vasculature, react to neural activity in a Ca2+-dependent manner to signal localized changes in microcirculation. Using in vivo two-photon microscopy, we showed that photolysis of intracellularly-bound astrocytic calcium ions (in the astrocytic endfeet that surround blood vessels), resulted in relaxation of vascular smooth muscle cells and pericytes, to increase capillary flow. The vasodilation occurred in less than half a second following Ca2+ increase in the astrocytic endfoot and was dependent on the amount of released Ca2+.

Photolysis of caged calcium in the astrocytic end-foot.

Although it is now widely accepted that astrocytes exhibit control over local changes in cerebral blood flow, this model may not yet be complete. For example, other glial cells, such as oligodendrocytes and microglia may also play a role in coupling neural activity to blood flow. In addition to testing the involvement of various other cell types, further efforts are underway to characterize the hyperemic response following the activation of complex neural networks, with the hope of gaining insight into how coordination of astrocytic calcium signaling may facilitate higher order processes.